This report focuses on the attention mechanism used in some previous session recommendation works. The conclusion is summarized in the final part: Some Intuition of Using Candidate Item as Query 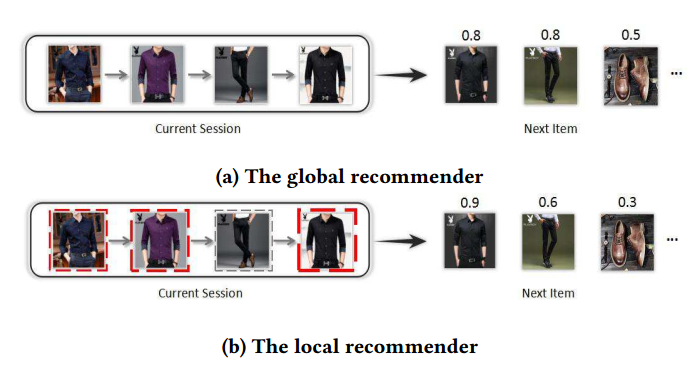 As shown in the above figure, the process is summarized as

Notes: The authors emphasize that in traditional methods, the main purpose of a session was outlooked. And then the authors utilize attention mechanisms to solve this problem. However, at present, using $h_t^g$ as a query is not reasonable enough for three reasons as follows:

A possible way to avoid these problems is to use the embedding of the candidate item $i$ as the query to extract the most related preference, denoted as $c_t^i$, of the user for the candidate item. And then the predicted score for each candidate item is calculated as $S_i = emb_i^TBc_t^i$

Gap: Capture both long-term and short-term interests in a session 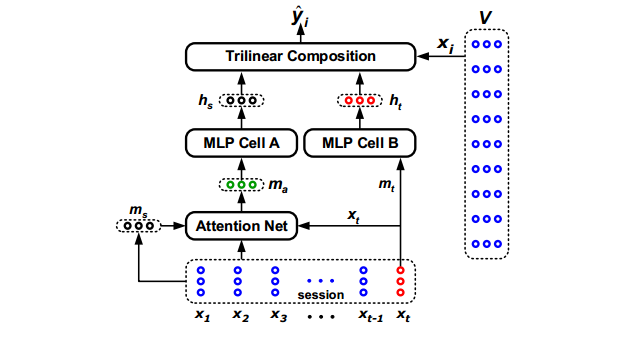 As shown in the above figure, given the embeddings ${x_1, x_2,…,x_t}$ of a session, the process is summarized as follows:

Method: Use Graph to model item relation in sessions and utilize Graph Neural Networks to capturing transitions of items and generate accurate item embedding vectors. For example, as follows, the three sessions are constructed as a graph.

Gap: propose a novel repeat consumption phenomenon where the same item is re-consumed repeatedly over time. The following table shows the repeat ratio in three public datasets. However, no previous works have emphasized repeat consumption with neural networks. (Multi-armed bandit problem has been studied for a long time to solve the repeat-explore dilemma for general recommendations.)

As shown in the above figure, the process is summarized as:

The idea of using the candidate item as the query has been utilized in some previous works. Here are some works. 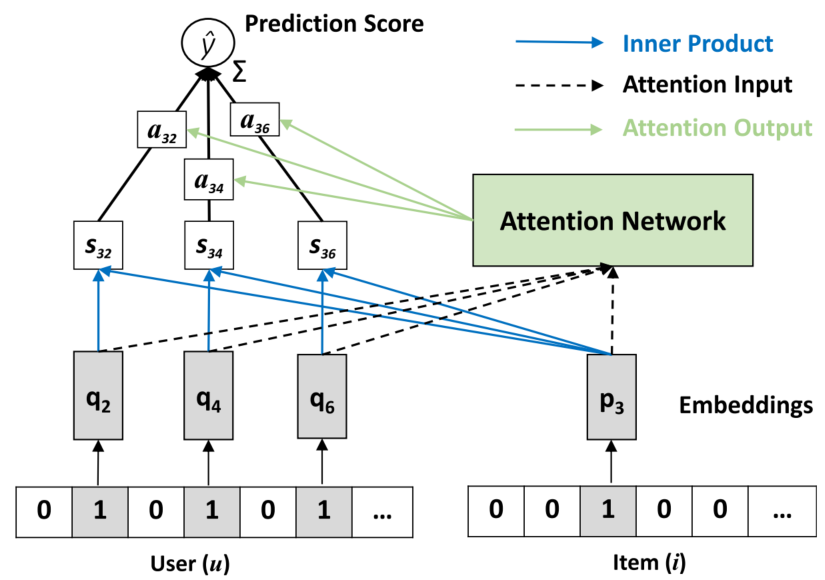 As shown in the above figure, the process is summarized as follows:

Notes: The model ignores the time order of each interacted item. Besides, each item in one’s interactions is independent and thus the context info is neglected.

experiments skills, adapt various techniques from the literature for this task.

Some Intuition of Using Candidate Item as Query

From the view of method, we argue that using the last hidden state as the query has the following drawbacks:

For the second drawback, the intuition is obvious. The last interacted item will be not consistent with the next item when the user’s interests drift. Here, we don’t use interest drift to explain this phenomenon. The interests drift is not proper for the phenomenon. We can combine this problem with the first and third drawbacks to define the problem as multi-interests problem: Each user have many kinds of interests.

As shown in the above figure, from the interaction sequence, we can see the use likes three kinds of movies: Action, Romantic and Education. For the user, the choice of the next movie is mainly dependent on which kind of movie is published or recommended. In this scenario, we can recommend Education, Action or Romantic movies. It’s not proper for the user just like Education movies at present.

To model the interests of users at each time and capture users’ multi-interests at recommendation time, we propose to use RNN to model users’ dynamic interests and the attention mechanism with candidate item as the query to capture the multi-interests.

For the example above, if the candidate item is an Education movie, we will focus more on the forth and the last movies to give the evaluate the score. And the recommendation for Action movies or Romantic movies is similar. Besides, other kinds of movies will get lower attention from all interactions. In this scenario, if we use the last hidden state as the query, then just Education movies will get more attention. Romantic and Action movies may be regarded as noises.

For previous attention-based works, when a user has interests in many different courses, the attention mechanism will perform poorly as the effects of the contributing courses are diluted by diverse historical courses. An example is shown in the following figure, for a trained attention-based model, the real target course gets lower recommendation probability than a randomly selected course although it gives more related courses more weights. 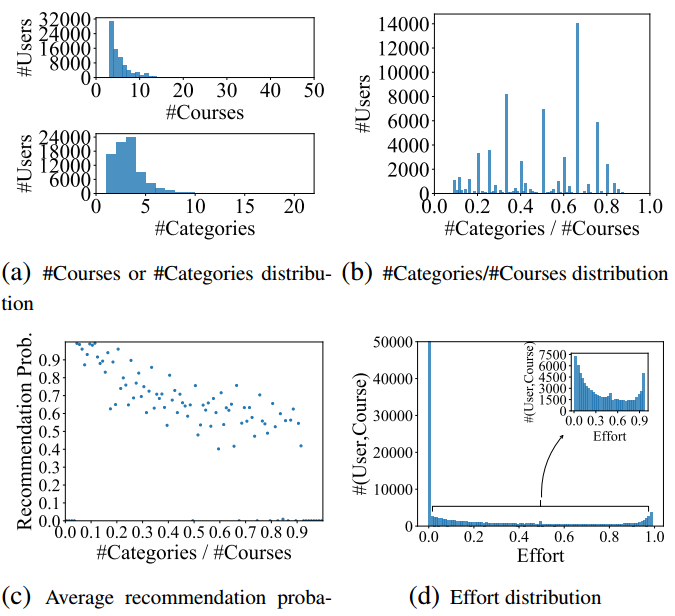 To explore and understand